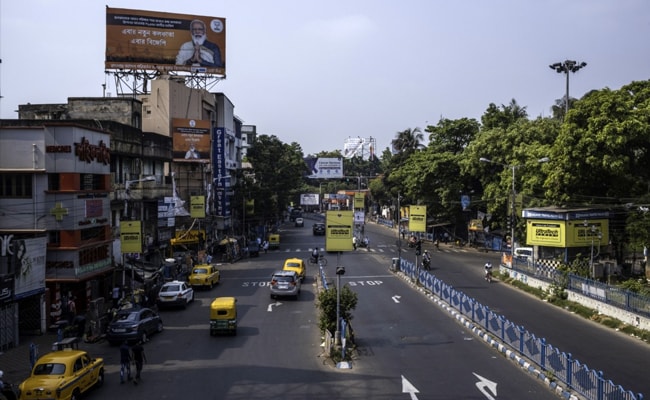 Analysts have started to cut price targets for stocks of some of the biggest banks and automobile giants.

Investors are bracing for market fallout as state after state locks itself down in India to contain the spread of the coronavirus as infections and deaths surge.

More than two thirds of states are shut if assessed by their contribution to national output, analysts at Jefferies calculated last week. Tamil Nadu, which houses foreign manufacturers including BMW and Dell, will also close from Monday, while Delhi extended its lockdown for another week. The measures come as pressure builds on Prime Minister Narendra Modi to impose strict nationwide curbs as he did last year.

All of that is forcing a reassessment among investors who had hoped that less-severe curbs would soften the blow to economic growth. Earlier in May, India’s central bank assured markets that it expects the dent in aggregate demand to be moderate in comparison with a year ago, with “containment measures being localized and targeted.”

The news of strict lockdowns in several states may hurt sentiment ahead, Ajit Mishra, vice president for research at Religare Broking Ltd., wrote in a report. Investors will be watching key macroeconomic data including inflation and factory output this week as well as the vaccine drive, he said. 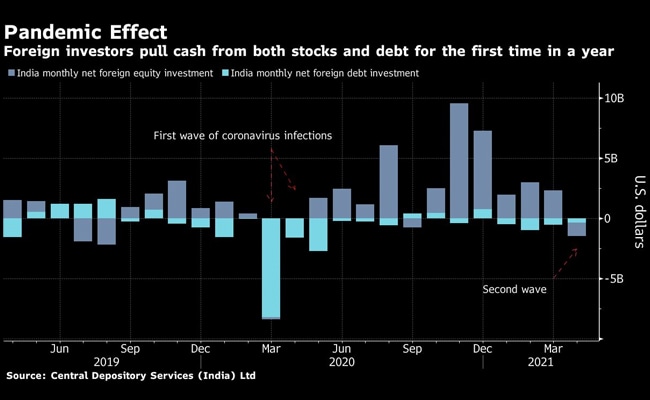 Vaccine shortages have complicated efforts to tame the outbreak, leaving investors assessing Modi’s next moves and guessing how long states will have to remain shut. Amid the uncertainty, foreign investors pulled $1.9 billion from India’s stocks and debt in April, the biggest outflow in a year, according to data compiled by Bloomberg.

“While India has refrained from a national lockdown thus far given its huge economic costs, the scales are tipping fast towards humanitarian benefits of curbing mass transmission, as new infections continue to rise with no peak in sight,” said Chang Wei Liang, an analyst at DBS Bank. “Even without a lockdown, mobility data for Indian cities are already showing that less and less people are moving out of their homes. This implies a natural brake to retail spending and business investment, until mass viral transmission ceases.”

Here’s how the crisis is impacting markets:

Recent interventions from the Reserve Bank of India have kept yields on 10-year sovereign bonds in check. But, the lockdowns could make it hard to keep borrowing costs low for much longer

Any revenue shortfall would stoke fears of a further rise in government borrowings, already near records, adding upward pressure on yields

Earlier this month, the central bank announced the second tranche of its Government Securities Acquisition Programme — India’s version of quantitative easing — under which it will buy Rs 35,000 crore ($4.8 billion) of sovereign bonds on May 20. 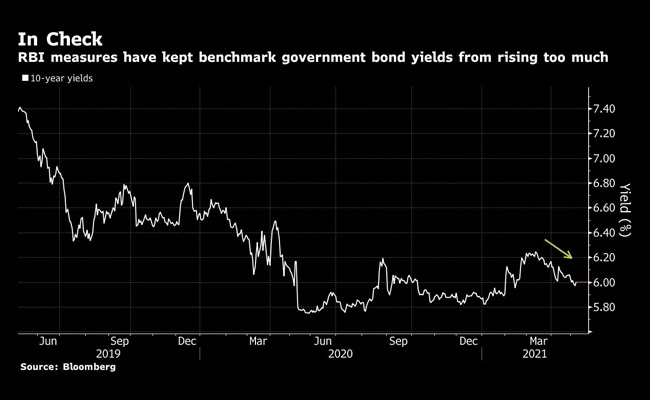 The lockdowns risk higher prices for everything from essential drugs to cars, due to the disruption of supply chains. Consumer-price inflation was already on course to test the upper limit of the RBI’s 2%-6% target, and recent gains in wholesale prices signal more pressure. If those strains build, the RBI may struggle to sell bonds to investors at current yields

Relative progress fighting the pandemic has been an important factor in global currency markets. India and South Africa present a case study in that among the so-called Fragile Five emerging-markets: Turkey, Brazil, South Africa, India and Indonesia

India’s rupee is down about 0.5% against the dollar this quarter even after a recent rebound, while South Africa’s rand has gained 5.1%. Read more about the rupee outlook

India is facing the world’s worst outbreak, contributing to half of the fresh infections in the world, while South Africa has seen new cases fall about 90% from a recent peak in January. India reported 669 infections per 100,000 people over the past month, about 10 times that of South Africa, according to Bloomberg calculations based on data compiled by Johns Hopkins University 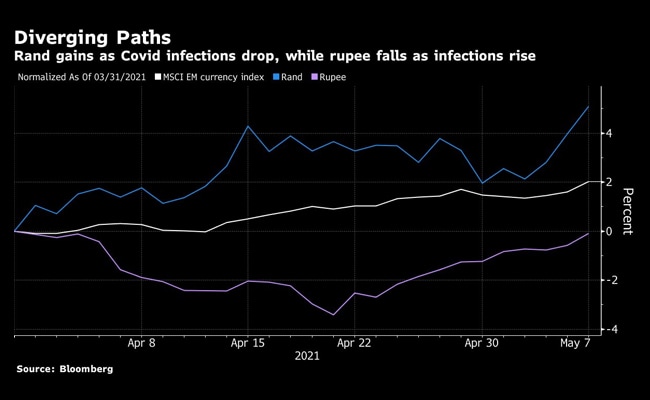 The rupee has slipped down the rankings relative to Asian peers after leading the pack in the first quarter. Any national lockdown could deal a further blow

Jefferies forecasts India’s economy will grow 10.2% in the year through March 2022, down 3 percentage points from its initial outlook. The figure already must be taken with a grain of salt given the contraction in the year-ago period. Any slowdown could weigh on corporate earnings 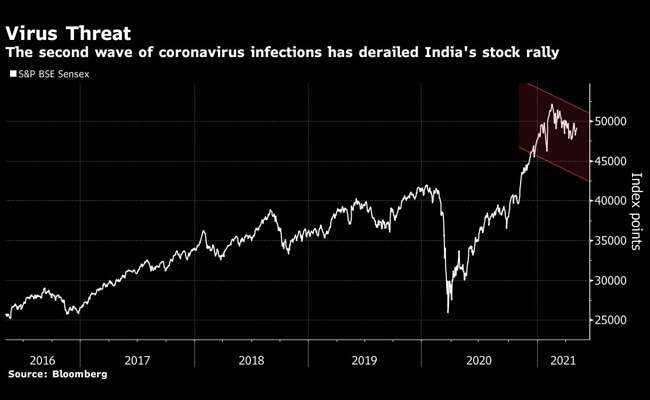 Markets will correct if the government announces a nationwide lockdown,” said Naveen Kulkarni, chief investment officer at Axis Securities Ltd. “However, the critical factor will be the duration. The longer any lockdown is, the greater will be the correction.”

Investors may be too optimistic given the likelihood of a more persistent impact from the pandemic fallout on the finances of companies and households, it said